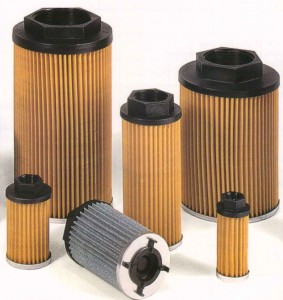 Given that particle contamination of hydraulic oil reduces the service life of hydraulic components, it would seem logical that a hydraulic system can never have too many filters. Well, not exactly.

Some hydraulic filters can actually do more harm than good. And so their inclusion in a hydraulic system is misguided. Pump inlet (suction) filters fall into this category. Inlet filters usually take the form of a 140 micron, mesh strainer which is screwed onto the pump intake penetration inside the hydraulic reservoir.

Suction strainers increase the chances of cavitation occurring in the intake line and subsequent damage to, and failure of the hydraulic pump. Piston-type pumps are particularly susceptible.

If the reservoir starts out clean and all oil returning to the reservoir is filtered, suction strainers are not required since the hydraulic oil will not contain particles large enough to be captured by a coarse mesh screen.

“The one thing a suction strainer does that’s worthwhile is to keep out the trash that gets dropped into the tank during service. We lost pumps to things like bolts that we know were not in the tank when it got built. The process of adding hydraulic fluid to the tank often doubles as the trash-installation function. The screens that are often installed in the fill neck usually get a hole poked through them so that oil will go in faster.”

A couple of years ago, I was involved in a situation where the seals failed in the swivel on a hydraulic excavator. This allowed the automatic greasing system to pump grease into the hydraulic tank.

My point about this story is, I don’t use this example as an argument against fitting suction strainers. Because grease should not be in the hydraulic reservoir. Likewise, I do not consider trash exclusion to be a valid argument for fitting suction strainers. Because nuts, bolts or similar debris should not be in the reservoir.

The correct solution is not to allow trash to get into the reservoir. And this is fundamental to my recommendation to remove and discard suction strainers, where fitted. There are a few exceptions to this rule, but trash exclusion is not one of them.

Bottom line: excessive vacuum at the pump inlet caused by suction strainers is a bigger threat to pump life in the long run, than trash that shouldn’t be in the hydraulic reservoir in the first place. And to discover six other costly mistakes you want to be sure to avoid with your hydraulic equipment, get “Six Costly Mistakes Most Hydraulics Users Make… And How You Can Avoid Them!” available for FREE download here.