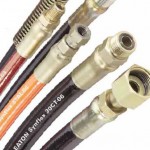 Clause 5.4.6.5.1 a) of ISO 4413:2010 “Hydraulic fluid power – General rules and safety requirements for systems and their components” states: “hose assemblies shall be constructed from hoses that have not been previously used in operation as part of another hose assembly…”

This means squeezing a new end onto a hydraulic hose that has previously been in service contravenes ISO 4413. In the majority of cases, the practical implications of this directive are not burdensome. After all, in most situations, the hose end outlasts the hose itself.

But one situation where this directive can be a ‘fly in the ointment’ for some hydraulics users is in the case of umbilical length hoses. Say a 15 meter length of 2″ multi-spiral hose sustains external damage within 5 meters of its end, but the rest of the hose is otherwise in serviceable condition. In such situations, due to the high cost of the hose, an economical solution may be to cut 5 meters off the original hose, squeeze a new end onto it and join a new 5 meter length to it. You may have seen this done. I know I have. But it’s not consistent with good practice–or compliance.

Nothing is a problem until it becomes a problem. Meaning in the above scenario, so long as the re-terminated hose doesn’t blow its new end off, all is good. But if the end blows off and a Standard-waving safety inspector comes around, then it IS a problem. In most jurisdictions, standards such as ISO 4413 aren’t L-A-W. But they will be referenced should a civil claim eventuate. Which means re-terminating a hydraulic hose can turn out to be a very costly mistake. And to discover 6 other costly mistakes you want to be sure to avoid with your hydraulic equipment, get “Six Costly Mistakes Most Hydraulics Users Make… And How You Can Avoid Them!” available for FREE download here.