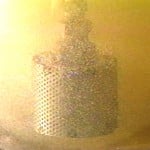 One of our members writes:

“We have a simple hydraulic system: pump and 4 double-acting cylinders. Most of the oil between the directional control valve and cylinders ‘shuttles’ back and forth in the lines without returning to tank. The manufacturer of the system, Rexroth, tells me there is never a need for ‘bleeding’ air from the system. How can this be? There are occasions when we change a component and air gets into the system. It would seem only natural to bleed the air out. Why would Rexroth say it is not necessary? More importantly, how do you bleed such a system?”

Generally speaking, air will work its way out of pretty much any hydraulic system over time. Even trapped air will dissolve into the oil and be transported back to the tank eventually.

But this is not to say that bleeding or purging of air is not a good idea to fast track the process. Reason being, air in the system can do damage and result in erratic operation until it’s removed.

Examples of damage caused by air contamination include:
–metal erosion resulting from collapse of air bubbles in the oil under pressure;
–loss of lubricity resulting in friction, abrasion, scoring and seizing between lubricated surfaces; and
–dieseling in cylinders (ignition of air-oil mixture when compressed) resulting in damage to the cylinder and burning of its seals.

Given this is the case, why would a manufacturer like Rexroth advise that air bleeding/purging is not necessary. My hunch is it’s because they have nothing to gain and everything to lose. If a pump burns-out due to aeration they get to sell you another one (there’s no warranty for this!). But if you get injured while bleeding air from the system on their recommendation, it’s possible they’ll end up paying you a couple million dollars. Can you blame them?

Put simply, it’s a liability issue for Rexroth — as it is for me were I to recommend that you do it, or tell you how to do it! Let’s face it; no one wants to cop a big fine for contaminating a work-site with oil spill, or worse, ending up with an oil-injection injury. So if you are going to bleed a hydraulic system, you’d better make sure you know what the heck you’re doing. Because you do so at your own risk.

But there is something I am happy to recommend you do to minimize free and entrained air on start-up. And it’s something you can do quite safely. I call it: ‘filling the voids’. And this principle is woven into the generic start-up procedure I outline on pages 103 to 107 of The Hydraulic Maintenance Handbook.

Sure, it’s not possible to fill every pipe, tube and hose in this way prior to start-up. So bleeding can still be beneficial–if you have confidence in yourself to do it safely. But if the system is left to purge itself, ‘filling the voids’ can make a significant difference to the volume of air that has to be expunged. And that’s a good thing.

Because allowing a hydraulic system to operate while contaminated with excessive amounts of air is a costly mistake. And to discover six other costly mistakes you want to be sure to avoid with your hydraulic equipment, get “Six Costly Mistakes Most Hydraulics Users Make… And How You Can Avoid Them!” available for FREE download here.

1 thought on “How To Bleed Air From A Hydraulic System”