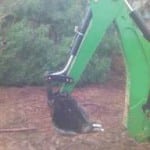 In my free email series, on YouTube and in exhaustive detail in The Hydraulic Troubleshooting Handbook, I explain the concept of how a double-acting cylinder becomes a displacement cylinder if the piston seal leaks. And as part of the explanation of this concept I state: “…if the piston seal is completely removed from a double-acting cylinder, and its ports are blocked, it will hold its load indefinitely unless the rod seal leaks.” And this is precisely how a ram, which has NO piston seal, supports a load.

But for the physics involved to apply (and the above statement to be true) the load on the double-acting cylinder must be acting to retract the rod (positive load). In other words, the physics are different when the load is negative. And the first situation must be understood in order to understand the second.

With this in mind, a hydraulics technician and follower of mine wrote to me recently about a troubleshooting assignment involving drifting cylinders. He arrives at the job with the notion that leaking piston seals can’t be the cause of the drift–something he attributes to my teachings. Where upon he sets about testing and eliminating all the other components in the circuit, until there is no other possibility: the piston seals must be leaking. And tear down of the cylinders confirms this fact, much to his surprise and dismay.

So the general gist of his message was to berate me for misinforming him. The cylinders in question were tilt cylinders on a forklift. And as you’re probably aware, when there’s a load on the forks, this acts to extend the tilt cylinders (negative load). Meaning they can’t/won’t turn into a displacement cylinder if the piston seals leak, but rather, the piston-rod will extend allowing the forks to tilt. And this is exactly what was happening in this case.

So I explained to this member, as politely as I could, that had he paid attention to the entire lesson, and taken the time to properly understand the rule and its exceptions, he would’ve been able to recognize which applied to these cylinders, and then tailor his troubleshooting approach accordingly.

Only paying attention long enough to get half the story, or not thinking deeply enough to gain a complete understanding, happens a lot. And it’s why you’ll bump into people with multi-decade hydraulic experience who, when push comes to shove, only have a superficial understanding of the craft.

I can think of many occasions during my own long journey in hydraulics where I’ve had to tax a lot of gray matter to completely grasp a concept or fully understand a problem. No effort, no reward. And an unwillingness to expend this effort, when required, can result in costly mistakes. And to discover 6 other costly mistakes you want to be sure to avoid with your hydraulic equipment, get “Six Costly Mistakes Most Hydraulics Users Make… And How You Can Avoid Them!” available for FREE download here.