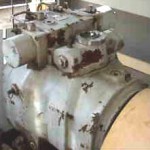 Rupert Murdoch, the boss of global media giant News Corporation was a neighbor of ours where I grew up. Not that my family was particularly well off. It’s just that my father’s farm happened to be situated close to a group of “sheep stations” the media mogul owned. But compared to the 300,000 acres Mr Murdoch controlled, Dad’s land holding was modest indeed.

In 1981, just in time for the wheat harvest, Dad took delivery of a new combine harvester. It was one of many he owned over the years, but this one was different. It was the first I’d seen equipped with a hydrostatic transmission for the ground drive. The infinitely variable and step-less control afforded by a hydrostatic transmission was quite an advance over the mechanical gearbox with a variable speed input used in earlier models.

Anyway, in its second season the hydrostatic transmission gave trouble. Downtime during harvest was always guaranteed to elevate Dad’s stress level to 11 out of 10. And that wasn’t a pretty sight. I didn’t know much about hydraulics then and looking back, boy do I wish a book like The Hydraulic Troubleshooting Handbook was available to me at the time.

Of course in the 35 years since, I’ve accumulated a lot of knowledge on hydrostatic transmissions. And an issue that is often overlooked and one that came up in a job I was involved in recently, is the combined effect of fluid compressibility and the ‘accumulator effect’ of conductors (the increase in volume of a hose or pipe as pressure increases).

When a hydrostatic transmission is subject to a sudden increase in load, the motor stalls instantaneously and system pressure increases until the increased load is overcome or the high pressure relief valve opens – whichever occurs first.

While the motor is stalled, there is no return flow from the outlet of the motor to the inlet of the pump. This means that the transmission pump will cavitate for as long as it takes to make-up the volume of fluid required to develop the pressure needed to overcome either the increased load or the high-pressure relief valve. How long the pump cavitates depends on the output of the charge pump, the magnitude of the pressure increase, and its influence on the increase in volume of the conductor and the decrease in volume of the fluid. This is illustrated in the following example.

A hydrostatic transmission operating the drill head on a drill rig is delivering a flow of 35 GPM at a pressure of 1000 PSI. A sudden increase in load on the drill bit instantaneously stalls the motor until sufficient pressure is developed to overcome the increase in load, which for the purposes of this example is 3000 PSI.

In order to increase system pressure from 1000 PSI to 3000 PSI, the transmission pump must make-up additional volume, due to the compression of the hydraulic fluid and the volumetric expansion of the high-pressure hose between the pump and the motor. But because the motor is momentarily stalled, there is no return flow from the outlet of the motor to the inlet of the pump. The only fluid available at the inlet of the transmission pump is 7 GPM from the charge pump, which is around 80% less than required!

In this example, the high-pressure hose between the pump and motor is SAE 100R9AT-16; 36 feet long. The volumetric expansion of this hose, due to the increase in pressure, is 9.7 in³ and the additional volume required due to compression of the fluid within this hose is 2.8 in³. Therefore the total, additional fluid volume required to increase the operating pressure from 1000 to 3000 PSI is 12.5 in³ (9.7 + 2.8 = 12.5).

To calculate the time taken for the operating pressure to increase from 1000 to 3000 PSI, which is equivalent to the length of time the transmission pump will cavitate, we divide the required make-up volume (12.5 in³) by the volume available from the charge pump per second (27 in³). In this example, the transmission pump cavitates for 0.46 seconds every time a sudden increase in load demands an increase in system pressure from 1000 to 3000 PSI (12.5 ÷ 27 = 0.46).

This problem occurs in applications where there are sudden fluctuations in load on the transmission. Typical examples include drill rigs, boring machines, and cutter wheels on dredgers. This 2.5 minute simulation video demonstrates the problem.