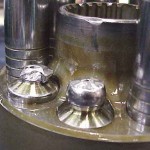 I was asked recently to give a second opinion on the cause of failure of a hydraulic piston pump. The hydraulic pump had failed after only a short period in service and my client had pursued a warranty claim with the manufacturer.

The manufacturer rejected the warranty claim on the basis that the failure had been caused by contamination of the hydraulic oil. The foundation for this assessment was scoring damage to the valve plate–see exhibit 1. 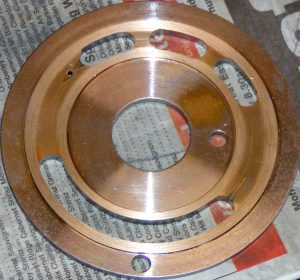 How does contamination cause this type of damage to a hydraulic pump?

When hydraulic oil is contaminated with hard particles that are the same size as the clearance between two lubricated surfaces, a process known as three-body abrasion occurs. Three-body abrasion results in scoring and heavy wear of sliding surfaces–see exhibit 2. 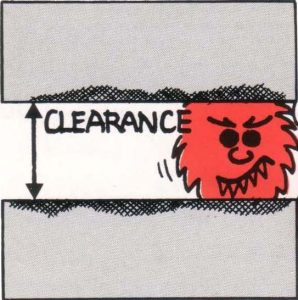 Exhibit 2. The process of three-body abrasion.

What other explanations are there for this type of damage?

A major clue that the damage to the valve plate was not caused by contamination in this case, is the pattern of wear. Notice that the scoring (bright areas) is confined to the inner and outer edges of the sliding surface of the valve plate (see exhibit 1). If the scoring had been caused by three-body abrasion, the damage would be more evenly distributed across the entire surface, with the areas between the pressure kidneys at the top of the picture, likely to show the heaviest damage. 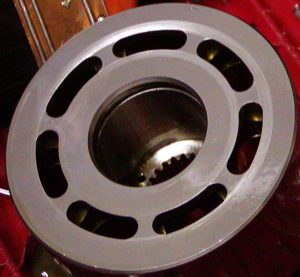 Root cause of failure

Although the valve plate was flat, its locating dowel was holding it off the head on one side (center right of exhibit 1). This in turn was causing the valve plate to be tilted against the cylinder barrel, resulting in uneven loading, separation and two-body abrasion of the two surfaces. The root cause of this hydraulic pump failure was not contamination; but rather improper assembly at the factory.

As this story shows, neglecting to carry out detailed analysis of hydraulic component failures can be a costly mistake. And to discover 6 other costly mistakes you want to be sure to avoid with your hydraulic equipment, get “Six Costly Mistakes Most Hydraulics Users Make… And How You Can Avoid Them!” available for FREE download here.

1 thought on “The Anatomy Of A Hydraulic Piston Pump Failure”