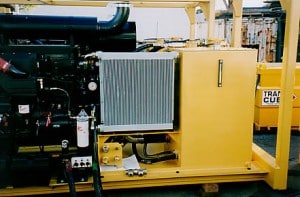 I’m currently visiting the Snowy Mountains region in eastern Australia, near a small village called Jindabyne, which is about 5 hours drive from Sydney. Jindabyne is 3000 ft (944 meters) above sea level.

As you’d expect, I’ve seen hydraulic machinery working on roads and construction sites in the area and I wonder how they perform on a hot day. Because at 3000 ft, air only has 90% of its sea level density. So a fixed-speed cooling fan will move the same volume of air but at only 90% of the mass–and it’s the air mass that removes heat from the hydraulic oil’s heat exchanger. Also, the heat transfer coefficient of this thinner air is lower, which means the heat exchanger may be only 75-80% as effective as it would be at sea level.

Now you might think that’s OK because the ambient air temperature at altitude is generally cooler than at sea level, and this would compensate for the loss of heat exchanger performance. So I researched the summer temperatures for the area. And while the long term average during the hottest months of the year is a relatively mild 27°C, the highest recorded temperatures for December, January, February and March are 36, 42, 37 and 36°C respectively!

These summer temperatures are on a par with what I would expect (at sea level) in my home town of Perth and its surrounds. This means if I moved a hydraulic machine whose installed cooling capacity can cope with a 40°C day at sea level — but only marginally so, from Perth to Jindabyne, I shouldn’t be too surprised if it were to overheat on a hot day at 3000 ft.

In other words, for owners of mobile hydraulic machines, (and the people who design them) variations in both ambient air temperature and altitude should always be considered when machines are moved between work sites which are geographically different. Failure to do this could result in costly damage to the hydraulic system. And to discover six other costly mistakes you want to be sure to avoid with your hydraulic equipment, get “Six Costly Mistakes Most Hydraulics Users Make… And How You Can Avoid Them!” available for FREE download here.